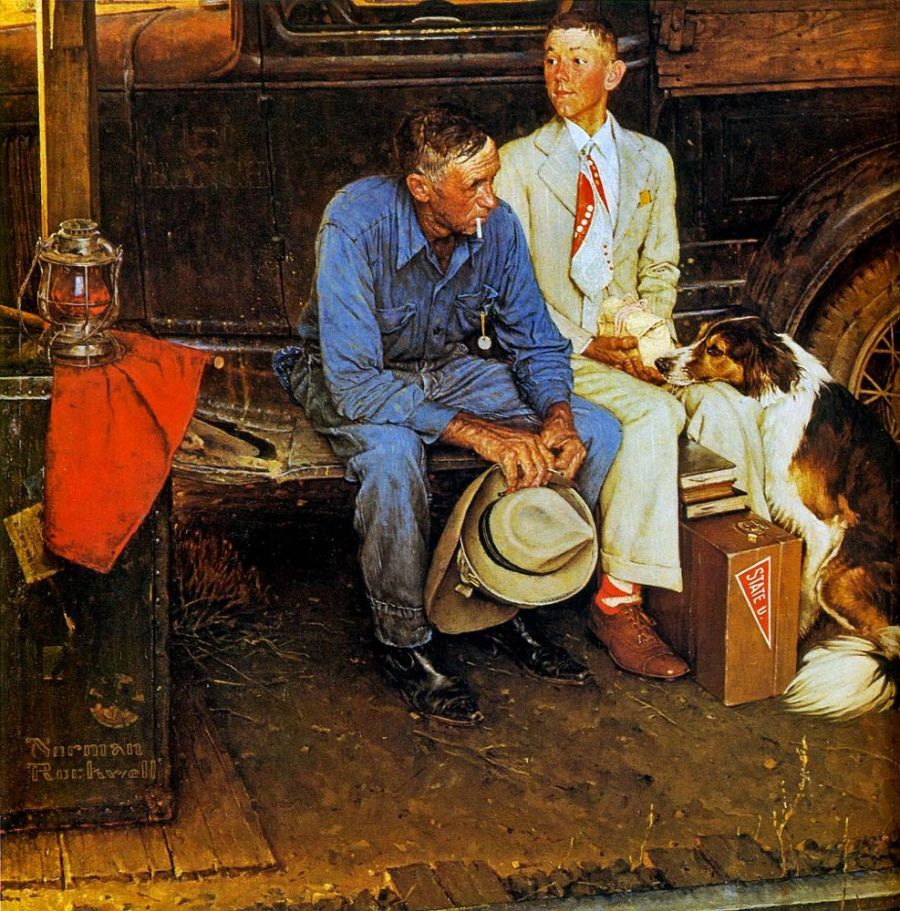 My father’s story has been one of lifelong struggle, of a man driven by love for his family, a moral compass he inherited from his father (who inherited it from his father before him), and pure, fiery passion. It’s the story of a man who was never destined for wealth and whom fate was rarely kind to, who is a deeply loving man but whom life has worn down and made cynical, but who would tell you today that, with the family that he has, he is the wealthiest man in the world.

He was born in Zanzibar, off the east coast of Africa. His family was very poor as he grew up. My father clearly remembers how a Coca-Cola was a luxury item. Perhaps most strong in his mind is the memory of being evicted from their home when he was a child. Before that, their landlord had put my grandfather in “civic jail”—because there, at that time, a landlord was empowered to imprison a tenant to collect a debt. When they were evicted, with all of their belongings literally thrown out onto the street, they sought refuge in a community center that was specifically for the Gujarati community. The family of seven—my grandparents, my father, and his siblings—all lived together in a single room. Within a few days, the community center decided they didn’t want them there any more, and gave them an eviction notice. Just to show them they were serious, they also came and took the door off the hinges for the bathroom. My father tells me that my grandfather, with the last little bit of money he had left, bought a frame for that eviction notice, to remember how the world had treated them.

Nonetheless, my grandfather’s philosophy was, “I will sell my plates and bowls, but I will educate my kids.” And, he did. My father was lucky enough to get a full education and did very well in school. It came easily to him. Always respectful, but sometimes mischievous, he was well liked by his teachers. He also found he had a knack for tennis. He and his high school principal would often play a game after school. Although his strongest strength was in mathematics and physics, his mind wasn’t drawn to engineering but rather to the thought of going to medical school.

As he came to the end of high school, he will tell you that his “mind wandered.” He decided not to pursue medical school, to step away from science altogether, and to instead travel to India for college and pursue economics. To this day, this remains his deepest regret.

Having earned his bachelor’s degree in India, my father had a new dream, a dream of this place on the other side of the world that he always heard about as being the land of opportunity. For a man for whom opportunity had always been so rare, and who felt he had squandered one of his best ones, it was the place he knew he needed to be. And, so, after traveling from India to Canada, he was then able to travel to the United States of America.

Coming to America on a student visa, and after finishing his studies, he worked his way up. He started as a busboy in Washington, D.C., and later became a waiter. He was soon able to get his green card and become a permanent resident of the United States.

By now, his family had moved to the United Kingdom—a benefit that comes from having lived in a former colony of the British Empire. Even in America, my father always thought of his family. He would try to visit when he could, and he was always sending money back to them. His philosophy was that 10% of his income belonged to his parents, and he kept to that.

During one of these visits back, a neighbor friend of my grandmother was visiting and noticed him. Afterwards, the neighbor started talking to my grandmother, asking, “Is your son single? Because my niece is single, and I think they might be a good fit for each other.” Her niece—my mother—was in Kenya at the time. They were introduced to each other, they started exchanging letters, and not too long after, they were engaged and they were married.

Back in America, my father had now worked his way up further to being a taxi driver. For years, he did not tell me this, and when he did he did so with a sense of shame; low-paying work is often stigmatized in the Indian-American community and it often hangs over one’s head for years. When he did tell me, I was proud to be the son of somebody who had to work his way up.

Soon, my father was able to find work in mortgage banking, becoming a mortgage underwriter. It was good work for him, and he worked very hard. Still, he was often unemployed, for he was always destined to struggle.

My brother was born and, for a while, all was right with the world. Unfortunately, he had a congenital defect that had not been found, and within a few months of his birth, his kidneys had failed him, he was on dialysis, he was undergoing surgery, and he was living in and out of the hospital. In the middle of all of that, I was born. Just a few months after my birth, my family’s world shattered as my brother suffered the stroke that changed his life forever, leaving him blind, epileptic, and intellectually disabled.

As my brother and I grew up, and as my father worked to keep a roof over our heads and food on the table, he followed through on the philosophy of his father: “I will sell my plates and bowls, but I will educate my kids.” He was a vigorous, passionate advocate for his children with the school system. It was not easy for him to navigate the special education system at all, and the system hardly cared for him. He also pushed—successfully—to have me placed in more and more advanced classes, so that I would always be appropriately challenged.

At home, he very much emphasized education. There was no television allowed on weekdays unless it was educational. As a result, I grew up on the shows of PBS—although I did manage to sneak in The Simpsons on most nights. (Sorry, Dad!) He also forced me to learn to read and write both Gujarati and Hindi. It wasn’t easy for me, but I benefitted tremendously from it.

His message to me in education my entire life was “focus.” He understood from his own life the importance of having a goal and working toward it. He told me never to “wander,” never to take my eyes off the goal. He was happy that I was naturally drawn to medicine, having grown up around it with my brother’s health difficulties. He encouraged me to pursue it, although he always feared that he was “forcing” me into it. To this day he’ll ask me, “Did you become a doctor because it would make me happy?” I tell him that, no, I became a doctor because I love practicing medicine, but that it does make me happy that he’s happy.

He is retired now. He lives on Medicare, Medicaid, Social Security, and with support from me. But, if you ask him, he’ll say he’s a multimillionaire. “I have a million-dollar wife and two million-dollar sons. At minimum, I have $3 million,” he’ll say.

I would not be where I am today had my father not lived the life he did. My life’s story would not exist without this story.

One thought on ““I will sell my plates and bowls, but I will educate my kids.””